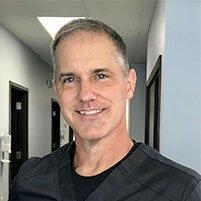 James Warren, MD, is the founder and president of Apollo Pain Management in Sun City Center, Florida. He was born in Kentucky and raised in the heartland of Columbus, Ohio, where he attended the Ohio State University and earned his BS in physics in 1989.

Dr. Warren later attended graduate school at Case Western Reserve University and earned an MS in Neuroscience. He attended medical school at the University of Cincinnati, where he earned his MD in 2002. He completed his residency in Anesthesiology at SUNY Buffalo in 2008, during which his training was interrupted while he served as a General Medical Officer for Operation Iraqi Freedom.

Dr. Warren has worked as an anesthesiologist for 10 years. During this time, he held several leadership positions, including serving on the Pharmacy & Therapeutics Committee at Town & Country Hospital in Tampa, and Interim Chair of Anesthesiology at Doctors Hospital of Michigan in Detroit.

His commitment to duty has always been an important part of his life. He served for over 15 years in the US Army Reserve, both enlisted and as a medical officer, having served two tours of duty in Iraq.

After practicing anesthesia for over 10 years, Dr. Warren decided to pursue his passion and completed an ACGME-accredited fellowship in Interventional Pain Medicine at the University of South Florida in 2019. It was here where he learned the latest and most up-to-date evidence-based techniques and procedures for the treatment of chronic pain.

Always curious, Dr. Warren continues to attend regional and national pain society conferences, where he both studies and presents research on the latest innovations on Interventional Pain Medicine in order to bring these techniques back to his patients in South Florida. Today, he lives and works in the South Hillsborough area.

Feel free to email us regarding any scheduling or general questions!